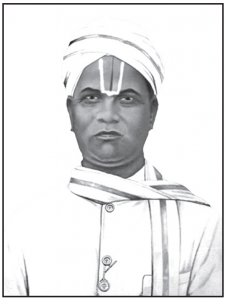 Intensely religious and God-fearing, Kandaswami Naidu was born in the year 1885 in Kalvoi Village near Thirupporur in Chingleput District. Though a Vaishnavite by birth, he was named after the presiding deity of the place, Lord Kandaswami.

Driven by strained circumstances Lakshmiah Naidu had left Kalvoi Village with their nine years old Kandaswami and three more children and reached Chetpet in Madras city around the year 1894, accompanied by some of his relatives and members of the community. Lakshmiah used to go to the Revu (as the Harbour was then called) where construction work was in progress and earned a little by working as a brick layer. Being very poor, Lakshmiah could not think of sending his son and daughters to any regular school. Kandaswami invariably followed his father to the Revu and supplemented his father’s meagre income. After his return from work, Kandaswami attended the school run by one Rangaswami Naicker, popularly as ‘nondi vathiar’ and learnt to read and write Telugu and Tamil. As an apprentice of Maistry Varadarajulu, he learnt ornamental and relief work in Masonry. Unfortunately, the demise of his father at that time, turned Kandaswami, his brother Venkatesan and two sisters, Chinnamma and Chenganiamma helpless orphans.

The burden of running the family fell on Kandaswami who was then in his early teens. None worked harder or lived more temperately than he did. Scorning delights and living hard laborious days, he pursued a career of industry. This early encounter with difficulty and adverse circumstances, proved to be lifting indispensable living condition for his later success. Thiru Calavala Cunnan Chetty, a wealthy businessman of Madras was then constructing godowns near the Harbour. Kandaswami sought employment there as a manual labourer at 1½ -annas a day. Necessity drove young Kandaswami to learn brick laying and plastering works more quickly and more efficiently than others. This he did while some of the structures of St. George Orphanage at Chetput were being put up. Within a short time, he established himself as a maistry under contractor by name Ramanuja Ayyar of Purasawalkam. He remained under his service for about seven to eight years and attempted to perfect himself by work and more work and carved out for himself an honorable competency and solid reputation for good workmanship.

A fortunate circumstance at this time gave a new turn and a fillip to his career. He entered service under Namberumal Chetty, a leading contractor. It was not, however, accident that helped Kandaswami but purposeful and persistent industry. If there had been accidents, they were carefully cultivated opportunities. Every step in his career was won by honest work, patience, perseverence and self-reliance amidst trials and difficulties. His sound understanding and quick perception soon suggested to him the possibilities of an independent career. With the small savings which he had or with the money which his father-in-law was said to have given him, he started brick kiln at Koyambedu near Madras and began manufacturing country bricks. With the permission of Namberumal Chetty, he took up small contracts and quickly established himself as an independent contractor, and one such was the excavation of earth for putting up the Pachaiyappa’s Hostel Building at Chetput.

Soon, his power of organising labour, his efficiency, integrity and promptitude of action won for him recognition as a master builder and he was enlisted as a P.W.D. contractor and was assigned the construction of a number of government buildings. He switched on to the manufacture of chamber bricks in the kiln at Koyambedu. This fetched him good profits and his income steadily rose. Through his great and sustained efforts Thiru Kandaswami Naidu amassed a lot of wealth and acquired several properties. He constructed on his own seven bungalows in Harrington Road, Chetput and another at 19, Subbaraya Gramini Street which became his permanent residence afterwards, besides a number of smaller houses for middle and lower income groups of people. He purchased a block of 21 houses in Sait Colony, Egmore. In addition, he purchased valuable house sites to the extent of about 85 grounds in Chetput and lands and gardens to the extent of nearly 160 acres in Koodal, Medavakkam, Maduravoyal, Nerkundram and Ayanambakkam villages. For sometime, he acquired the Zamindari rights of Perumbedu Village, which he sold away to Sunampet Zamindar.

In 1944 at the age of 59, Thiru Naidu fell ill. In July of the same year, he settled some of his properties on his three minor daughters. He was then contemplating as to how best he could utilise the rest of his vast estate. His health deteriorated and in May 1948, he fell seriously ill. On the suggestion of some of his best friends and admirers among whom was Thiru K. Venkataswami Naidu, B.A., B.L., the then Trustee of Pachaiyappa’s Charities, he caused his last Will and Testament to be drafted by his advocates Pais Lobo and Alvares of 113, Armenian Street, Madras and signed it on the 21st May, 1948 in the presence of Thiru A. K. Muthuswami, Advocate and Thiru K. Venkataswami Naidu. Two days later at about 9 pm. on Sunday the 23rd May 1948 in the presence of a host of relatives and friends, Thiru Kandaswami Naidu breathed his last. He was then 63 years. Under the will late C. Kandaswami Naidu bequeathed and endowed the residue of his vast estate, after express legacies to the charities of Pachaiyappa directing the Board of Trustee to ” utilise the said amount according to the objects and provisions of the said Trust for the upkeep and maintenance and development of the institution”. The board was also empowered to make any endowment in his name. The official Trustee was made the executor of the Will with full powers to sell and dispose the properties for the purposes stated in the Will. The Official Trustee took charge of the estate on the testator’s death and obtained probate of the Will. Since then he has been administering the estate, valued at several lakhs of Rupees. In the course of nearly 20 years, the Official Trustee has realised about Rs. 14 lakhs by way of sale proceeds of certain properties (notably seven houses in Harrington Road) which were not remunerative and by way of income from the other immovable properties.

When Dr. A. Venugopal, M.S., F.R.C.S.. was the President of the Trust Board of the Pachaiyappa’s Charities, as the legatees under the Will with the laudable intention of fulfilling the wishes of the benevolent testator and to perpetuate his name, resolved on 25th April, 1967 to create an endowment in the name of the testator by starting two Colleges, one for Men at Madras and the other for Women at Cuddalore from the academic year 1967-68. Towards this end the Trustees moved the High Court on the 27th April, 1967 for the issue of appropriate directions to the Official Trustee for the diversion of funds necessary for starting of the two colleges. The Hon’ble Justice Thiru T. Ramaprasada Rao, in his judgement delivered on the 4th May, 1967, allowed the application and directed the Official Trustee to offer security to the University for the sum of Rs. Four lakhs and also to advance a loan of six lakhs for the construction of buildings, etc. of the proposed Colleges. The loan thus paid has been made recoverable from the surplus income accrued from the estate payable to the Trustees of Pachaiyappa’s Charities.